We had heard good things about Capture Screenshot Lite so we decided to check it out. The first thing that struck us was its cheekiness by stealing all the icons from the Windows Snipping Tool! Check it out …. 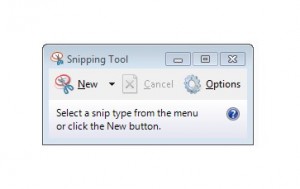 They have got to be joking! Fortunately there are a few functional addons that don’t exist in the standard snipping tool. We found the highlighter to be friendlier plus there are Undo and Redo buttons. But otherwise it doesn’t really add a lot to the original tool.

Alas there was a downside, the software doesn’t play nicely with multiple monitors and doesn’t have a taskbar presence which seems a bit strange and makes you wonder how stable the software is.

So Capture Screenshot Lite gets a big fat zero out of 10 from us on the usefulness scale but a big thumbs up for cheekiness!

But of course it is its usefulness as an alternative to the standard Windows tool that we are interested in. PicPick’s screen capture tool has some great features including dual monitor support, sharing to Facebook, Twitter and email. It also repeats the last capture, handy for those repetitive screen capturing tasks. There’s no video capture but then again neither has the Windows snipping tool. So it’s not a massive step-up from the snipping tool in terms of screen capture but the fact that it has a handy set of features thrown in too, there’s bound to something in there that the user will find useful.

PicPick runs nicely on all versions of Windows (apparently) and doesn’t talk to the registry or system folder, making it a portable piece of software. More than 28 languages are supported.

A home version of PicPick is available from the developer’s website.

Jing is a great piece of free software from the guys at TechSmith and is a definite alternative to the standard Windows snipping tool. Jing is especially handy for those of us into social networking as video captured using the software can be easily shared on your twitter or Facebook account. Other great features include

Unfortunately Jing video capture is limited to 5 minute chunks but its sibling software Snagit will allow you to grab those longer video tutorials.

But as free image and video capture software it’s hard to look past Jing. It runs on Windows XP, Vista and 7 plus there’s a Mac OS X version available running on 10.5.8 or later.